One ounce of watermelon seeds contains approximately 158 calories. That’s not much lower than an ounce of Lay’s Potato Chips (160 calories), but let’s take a look at what constitutes an ounce. There are approximately 400 watermelon seeds in a single ounce, far too many to eat in one sitting. By contrast, there are only 15 potato chips in an ounce, far less than most people would normally munch in one sitting.

A large handful of watermelon seeds weighs about 4 grams, which contains about 56 seeds and just 22 calories. Far less than a bag of potato chips!

One of several minerals found in watermelon seeds is magnesium. In a 4 gram serving, you’ll get 21 mg of magnesium. The FDA recommends adults get 400 mg of this mineral daily. Magnesium is essential for many of the body’s metabolic functions. It’s also required to maintain nerve and muscle function, as well as immune, heart, and bone health.

A handful of watermelon seeds contains about 0.29 mg of iron. It might not seem like much, but the FDA only recommends adults get 18 mg in their day. Iron is an important component of hemoglobin — carrying oxygen through the body. It also helps your body convert calories into energy.

There are 2 μ of folate in a single serving of watermelon seeds. The FDA recommends adults get 400 μ each day. Folate, also known as folic acid or vitamin B-9, is important for proper brain function and also works to control homocysteine levels. Women of childbearing years need even more, since folate deficiency has been associated with certain neural tubal birth defects.

Watermelon seeds also provide a good source of both monounsaturated and polyunsaturated fatty acids — 0.3 and 1.1 grams, respectively. According to the American Heart Association, these fats are useful in protecting against heart attack and stroke, and lowering levels of “bad” cholesterol in the blood.

The Takeaway Watermelon seeds have many health benefits. Although the amounts of some minerals and vitamins within them may seem low, they are still far preferable to potato chips and other unhealthy snacks.

Check the Examples of Watermelon Seeds Color Sorter as below: 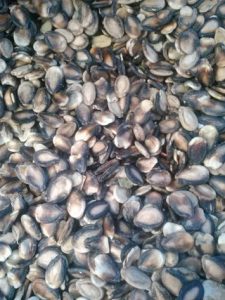 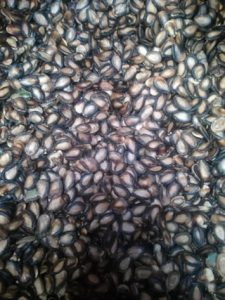 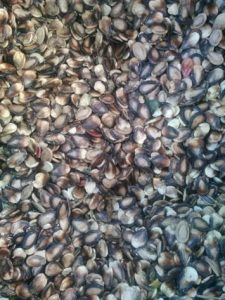