The name adzuki is a transliteration of the native Japanese name. Japanese also has a Chinese loanword, shōzu (小豆), which means “small bean”, its counterpart “large bean” (大豆 daizu) being the soybean. It is common to write 小豆 in kanji but pronounce it as azuki About this sound listen (help·info), an example of ateji.

In China, the corresponding name (Chinese: 小豆; pinyin: xiǎodòu) still is used in botanical or agricultural parlance, however, in everyday Chinese, the more common terms are hongdou (紅豆; hóngdòu) and chidou (赤豆; chìdòu), both meaning “red bean”, because almost all Chinese cultivars are uniformly red. In English-language discussions of Chinese topics, the term “red bean” often is used (especially in reference to red bean paste), but in other contexts this usage may cause confusion with other beans that also are red. In normal contexts, “red cowpeas” have been used to refer to this bean.

The Korean name is pat (hangul: 팥), and in Vietnamese it is called đậu đỏ (literally: red bean). In some parts of India, they are referred to as “Red Chori”.In Punjabi it is called “ravaa’n” and is a common ingredient of chaat. In Marathi, it is known as Lal Chavali (लाल चवळी)- literally meaning ‘red cowpea’. In Iraq its name is (لوبيا حمره) and that mean “red cowpeas”

In East Asian cuisine, the adzuki bean is commonly sweetened before eating. In particular, it often is boiled with sugar, resulting in red bean paste (an), a very common ingredient in all of these cuisines. It also is common to add flavoring to the bean paste, such as chestnut.
Matcha muffin with sweetened adzuki beans
Red bean paste is used in many Chinese dishes, such as tangyuan, zongzi, mooncakes, baozi, and red bean ice. It also serves as a filling in Japanese sweets such as anpan, dorayaki, imagawayaki, manjū, monaka, anmitsu, taiyaki, and daifuku. A more liquid version, using adzuki beans boiled with sugar and a pinch of salt, produces a sweet dish called red bean soup. Adzuki beans commonly are eaten sprouted, or boiled in a hot, tea-like drink. Some Asian cultures enjoy red bean paste as a filling or topping for various kinds of waffles, pastries, baked buns, or biscuits.

Traditionally in Japan, rice with adzuki beans (赤飯; sekihan) is cooked for auspicious occasions. Adzuki beans are used in amanattō and ice cream with the whole bean (such as in the ‘Cream & Red Bean’ product produced by IMEI) or as paste.

Adzuki beans, along with butter and sugar, form the basis of the Somali supper dish cambuulo.

In Gujarat, India, they are known as chori.

In Malaysia and Singapore, red beans are a major component of the dessert Ais kacang. 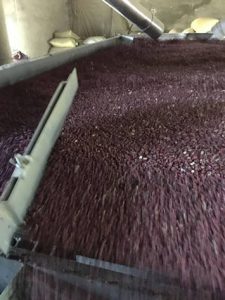 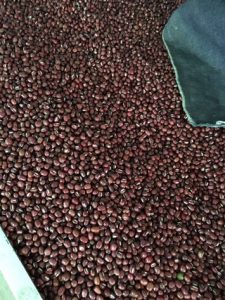 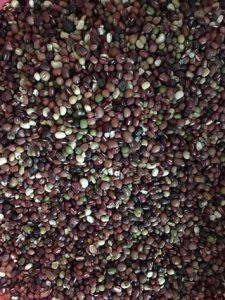